It’s easier if you squint.

Which is also true of the process to create such details in the first place. I’ve recently reintroduced my Copic Multiliners to my creative process, as the replacement Mitsubishi Uni Pin fine liners aren’t quite as reliable as I would’ve hoped they’d be. Great pens- but they run out incredibly quickly. Or seem to. Which isn’t too much of an issue as they’re fairly cheap, but even things that are fairly cheap become expensive if you’re continually investing in them. For example, I’ve already replaced the 0.05 pen three times since I started using them.

So I decided I’d take another chance on the Copic Multiliners.

They’ve always been great pens and they’re exceptionally reliable. That said, I did run into an issue replacing a nib and ink cartridge that made me slightly wary of them. But the new replacements have taken to the pens perfectly, everything is great, and as to familiarise myself with them again I’ve been doing ink sketching. You’d be surprised how different certain pens feel.

Or maybe you wouldn’t. But it makes for great tangential conversation, as it relates back to how much confidence you have with particular materials and much of that is derived from how they feel in your hand. Or how they react to certain types of paper. It’s particular evident in how you sketch with pencils, too. As you tend to lean on certain qualities of pencil to make it easier to translate those lines to ink, which, again, feels quite different depending on the type of pens you’re using. I notice that with Copic Multiliners I’m able to sketch finer details as I can actually translate those details to ink with them. The difference between 0.05 and 0.03 seems insignificant- but it’s there- and it’s very noticeable. Especially when you habitually sketch fine details. 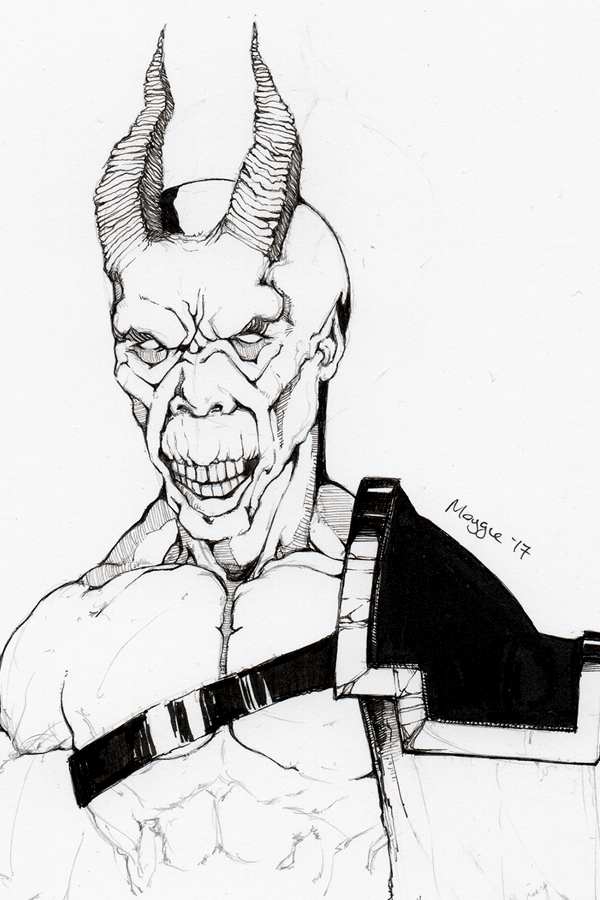 It’s not only the horns that are greatly textured.

This particular sketch falls somewhere between a few earlier attempts and a finalised attempt with this approach. An approach that will likely include Faber Castell Polychromos at some point. I’m rather limited in my colour selection with those at the moment- but I’m sure I can work something out. I have got a small collection of certain colours. It’s also likely I won’t move straight to a finalised piece and more likely that I’ll do some more sketching. Trying to learn more as I go. But I’m fairly pleased with how the line work in this piece turned out.

I’m also quite pleased with the horns.

I don’t usually illustrate horns in this particular style but I do like them. I’ll be honest, I’ve never really understood how they work anatomically and some might argue that I still don’t. But I like ’em. They’re neat. The rest of the anatomy is fairly standard and muscular. Which is pretty much my standard. I even threw in a little armour to further my progress there, too.

It’s been a while since I’ve done larger pieces and most of that is down to my own perceptions of my inability to do so. Which, again, is partly due to my confidence. So I’m trying to work through new ideas that basically force me to do these things. Mostly because I don’t understand how arm anatomy works, either. So if I can cover that with armour I’ll be fine. I’m kidding. Mostly. This year has definitely been a learning experience, for better or for worse. I’m leaning towards it being for the better of my creative efforts as a whole. But you could also argue that I’ve wasted time pursuing some approaches that are less useful. That said, I’m starting to think that the side effect of being creative and being on social media is feeling like you’re never good enough.