Quite the comparison to make.

This is more or less the same idea as Comparison in Blood but it’s in reverse, which is more significant than you might think. It’s also slightly overdue as I’ve not been feeling well recently. I couldn’t really do much about that, though. I’d much rather have slept at some point in the last week. In any case, this was always a spontaneous piece and one that will remain unfinished for various reasons. But as a material study it’s actually fairly useful. It might not seem as significant as I’m suggesting but I assure you it has merit. 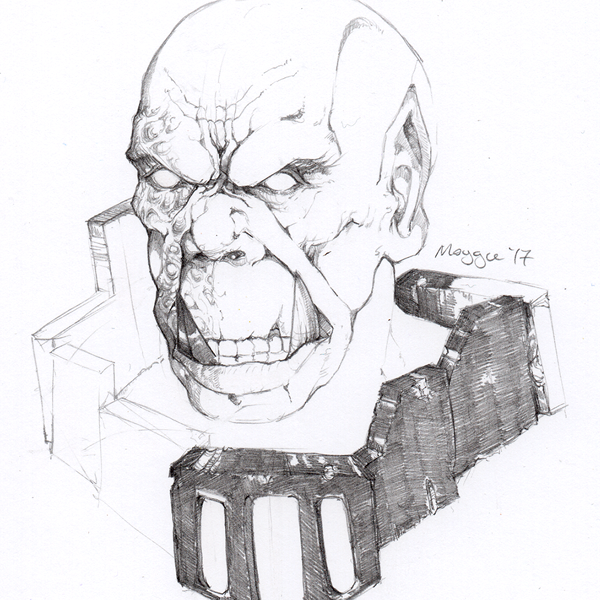 Hence why I’m doing these slightly odd studies in the first place. In this case, I was mostly trying to see how much impact adding line work to the piece would have. This is slightly closer to what I’d do traditionally, too. But it’s still a laborious and overworked process, as I’m still of the opinion I’m doing extra work due to the limited technical specifications of my tablet.

It’s still a possibility that I’m entirely wrong about that assumption. I don’t think I am. But I wouldn’t rule it out. I’ve definitely learned new things as a result of these material studies, though. I feel as though my digital pieces are stronger and that there’s potential for better results in the future. How I’m going to go about achieving those results, what form they’ll take, and with which equipment is entirely open to interpretation at this point. I’m almost certain I’m going to invest in better equipment mostly because I’m curious. That’s as good a reason as any to spend a lot of money, right? You know what they say about curiosity and cats. I might not be an actual cat- but I’m covered in enough of their fur that I might as well be.

The biggest challenge of this comparison was to try and recreate something recognisably similar. Not exactly the same- but recognisable enough that you can at least see what I’m trying to do. Which I hope you can. Otherwise that previous sentence exists simply to exemplify my failures. Usually I’m just applying digital approaches to previously attempted traditional pieces, but this seemed like a fun change of pace. Mostly to see how different the approaches would look and feel once completed. Unsurprisingly, they’re incredibly different.

Probably better approached with ink, too.

But that was mostly a matter of time and not wanting to invest that much into something to be used as a comparison. I’m fairly confident in my ability to translate pencil to ink at this point. I’m scarcely using that for anything worthwhile- but that’s not important. What is important is that I’ve got my confidence back. Somewhat. I think there’s some left under the cat.

I apologise if this content feels disjointed or it’s not particularly what people want to see. I’ve always believed that knowing where you came from is important, that knowing where you’re going is equally as important, and that we should do our best to understand these things. Especially for those who create. We’re often more personally invested in our work and there are usually reasons why certain things appeal to us. Being able to utilise those- through understanding, learning, and experimentation- is incredibly important to our growth. We’re all going to fail at one point or another, but understanding why we failed and learning from that is infinitely more important than not.

World of Warcraft, Warlords of Draenor, Blackhand, and all associated trademarks and devices are owned by Blizzard.