Haunted by the past, hopeful for the future.

While being hunted by the ruthless and unwavering Galactic Empire, our diffident protagonist, Cal Kestis, attempts to retrace the journey of a Jedi Master and seeks to uncover the secrets of the Zeffo. An ancient civilization that had an unprecedented understanding of the mysteries of the Force. Who were also fascinated by rolling giant balls around, and who would bestow their knowledge unto those capable of doing so. Star Wars Jedi: Fallen Order is an extraordinarily engaging narrative-driven RPG in which you endeavour to rebuild the Jedi Order while collecting many stylish ponchos.

You’ll also be collecting various seeds for the Mantis’ terrarium.

Those, much like the ponchos, are of the utmost importance and contribute greatly to your success, should you ever wish to befriend Greez. Which has its benefits. He does become slightly less crotchety with every seed recovered, despite being incredibly vocal about his hatred of nature.

Star Wars Jedi: Fallen Order also features vast landscapes to explore and it’s ridiculously fun to do so. While many of the rewards are cosmetic, secrets, such as Stim Canisters, are incredibly valuable and are always worth pursuing. Even if you’re being relentlessly pursued by the sadistic Second Sister. She can wait until you’ve discovered every chest, secret, and upgrade for BD-1 on every planet. It’s not like you’re the last hope for hundreds of Force-sensitive children. Which is not to suggest that exploration is always frivolous, as exploring each of the ancient tombs often results in Cal strengthening his connection to the Force and learning a new Force ability. Of which there are only a few but they are incredibly useful. Not that I’d necessarily agree that being able to jump twice requires a deeper connection to the Force, but I digress. 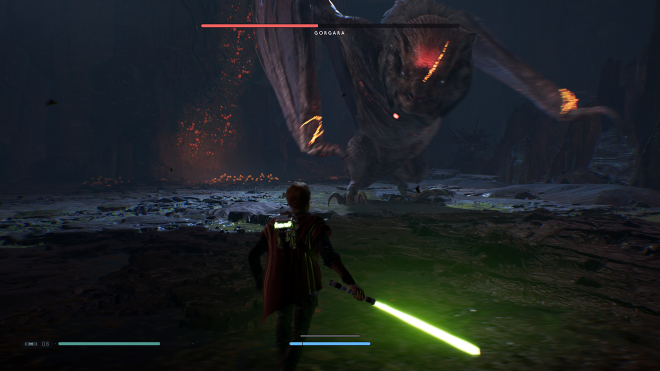 Character development is tied to Force abilities, as each one further expands the skill tree allowing for greater proficiency in combat and heightened character statistics. There aren’t too many ways to develop Cal besides that. You can fully customise the appearance of his lightsaber, and unlock new lightsaber styles throughout the main campaign. Each offering its own unique fighting style with its own advantages and disadvantages. Which is perfectly suited to the exhilarating lightsaber duels with the Sith, but doesn’t significantly alter the offensive (or defensive) capabilities of his lightsaber.

You can find equipment that allows you to explore previously inaccessible areas, but it doesn’t aid you in combat nor does it change Cal’s base statistics considerably. However, while limited, character development is meaningful, as each investment into the skill tree yields decent rewards.

I wasn’t really sure what to expect from Star Wars Jedi: Fallen Order. Whether it would be a complex RPG experience akin to Star Wars Knights of the Old Republic, or whether it would favour an action-orientated approach emphasising storytelling. In retrospect I’d say it was mostly the latter. But that’s not to say that there aren’t RPG mechanics, and utilising them will only further the techniques and abilities available to you in combat. Or while exploring planets. Exploration certainly makes up the bulk of the experience but that’s not a bad thing. Not when the exploration is as enjoyable as it was, and when you’re actually excited about returning to Bogano for the fifth time. I’d highly recommend it to those who enjoy Star Wars (in any shape or form) or those looking for an in-depth single player RPG experience.

A civilization fixated on rolling giant balls around.

Given that many of their secrets allow for greater understanding of the Force, and that you don’t need to be Force-sensitive to roll a giant ball around, it does seem like an odd way to assess the suitability of those searching for answers. It certainly makes exploring ancient tombs more interesting, though. If only the Galactic Empire didn’t have the Sith who could just as easily uncover these secrets, then we might have a chance to rebuild the Jedi Order. Not that the crew of the Mantis is without hope. We’ve rolled enough giant balls into their sockets to uncover the secrets of two ancient tombs.

Now we’ve just got to uncover the secrets of the third.

But, as we’ve gained additional Force abilities, and BD-1 has been upgraded with new technology, we’re going to completely ignore the Galactic Empire to explore planets. To acquire ponchos and other cosmetic rewards. Maybe uncover a few secrets, too. Those tend to offer the greatest benefits.

While ponchos and other cosmetic rewards are neat, unlocking new (or upgrading existing) equipment and technology allows for further exploration of each planet. Or allows for progression through the main campaign. Cosmetic rewards are only useful if you’re actually going to wear them, or apply them to BD-1 and the Mantis. Force echoes can also be discovered, and they serve to enrich your understanding of the history of the planet you’re currently exploring. So there are quite a few things to do on each planet and exploring them is ridiculously fun. I’d just be more enthusiastic to find anything other than secrets if the rewards from chests were more meaningful. Not that I’ve ever cared for cosmetic rewards. So the aforementioned probably says more about me than about the rewards themselves.

BD-1 is the bravest companion a Jedi could have.

I am intending to return to each planet to fully explore it, though. Collect all of the chests, secrets, and interesting technological upgrades present. Even if I’ll have more ponchos than any one Jedi knows what to do with. I’d personally prefer some robes. Not that we’d be able to hide from the Galactic Empire very effectively when we resemble the atypical Jedi, but at least we’d look stylish and that’s what truly matters. It won’t take too long as I’ll have my trusty (and sometimes confusing) Holomap to lead the way. It’s definitely one of the better maps I’ve had the pleasure of navigating planets with.

I’ve greatly enjoyed my time with Star Wars Jedi: Fallen Order. It’s a very capable single player experience which doesn’t artificially extend existing content. Everything happens as you would expect it to, and besides Stim Canisters, which are arguably the most valuable secret, there are few reasons to revisit (and fully explore) every planet besides the cosmetic rewards. Which some may consider a failing of the exploration mechanics. But I find it very refreshing to revisit planets as and when I want to, without being required to grind through hours of thoughtless content. You’ve no obligation to collect everything but you can if you want to. Or you can continue with the main campaign. Or you can do some combination of both. It’s entirely up to you when you want to approach things, or if you want to approach them at all..

Ever wanted to be a Jedi?

Star Wars Knights of the Old Republic is a RPG of old that features an engaging story, a myriad of character development options, a heaping helping of things to do, and the opportunity to travel the galaxy with your own band of rogues. The mechanics are based on Wizards of the Coast’s Star Wars Roleplaying Game, which is a d20 system derived from the Third Edition Dungeons & Dragons rules. That said, if you don’t understand any of that, or you’ve never played those rules before, you are still able to fully enjoy this title as you can pick up the concepts quite easily.

Before you earn your lightsaber you’re going to need to create your character. You can choose from the Scout, the Scoundrel, or the Soldier and each will provide different combat and exploration bonuses. These are fairly general classes, though. So it’s a good idea to go through the different options, weigh up the benefits, and decide how you’d like to progress from there.

I’m usually be one for rolling a Soldier, but the Scout had some pretty impressive utility which swayed my decision.

You’re going to earn some companions along the way, too. So, don’t worry- you’re not alone. Some of these bring fairly unique abilities or weapons to your party, while others will allow you to access abilities a little earlier than your character would normally learn them. Their equipment and yours will be scattered all across the various locations you visit, while some of it is customisable and can be upgraded. Most commonly you’ll be able to upgrade your lightsaber components but other weapons can also be upgraded. There are some really cool companion choices as well, like, for instance, the Wookie, who is a beast (no pun intended) in close combat.

Go to Tatooine they said. Sand People are friendly they said.

Alongside the other customisation options there are also a number of special attacks that you can learn. Or, if you’re a Jedi, a selection of Force Powers. These range from fairly mundane overcharged blaster shots, to the ability to heal allies or injure enemies via the use of your Force Points. Using these abilities will significantly improve your chances of being successful in combat, too. As many of the enemies you’ll face will employ fairly similar- if not the same- abilities.

For this reason bosses can be quite tough as they have some really powerful abilities at their disposal.

Questing combines area specific objectives (where you’re either given or you find multiple quests in a single area) and exploring the galaxy for new planets (and the quests found therein). That said, most areas are quite small and so you’re aren’t expected to run back and forth over vast stretches endlessly. Exploration is advised as well, as there are many hidden locations where you can find either exceptionally powerful items or (at the very least) a few thousand credits. This is a title set firmly in older design principles, though. So if you forget where you’re going, what you’re looking for, or how to get there you’ll need to refer to the quest log. Quest markers not included!

It’s a fairly large adventure, too. You can easily sink several hours into exploring additional areas, talking to companions, and upgrading your equipment per quest run. It’s a rare blast of nostalgia in a familiar universe that many have come to know and love, which, despite being an older title, gives you a surprisingly expansive universe to explore.