May you be consumed by the bloodthirsty swarm.

One of the more interesting achievements for the Diablo III 20th Anniversary Event is to complete The Darkening of Tristram with a freshly created Lvl 1 character. Not necessarily too difficult, but definitely something I had to think about (mostly because I have duplicates of most classes and don’t desire triplicates). That said, there was one class (and build) that I’ve been interested in for a while- the summoner Witch Doctor. My first Witch Doctor is more of a poison orientated caster that barely relies on his Gargantuan at all.

I only really use it to provide a small amount of damage.

The resulting new build relies heavily on pets but does do formidable cold damage without them. Focusing mostly on the damage over time aspects of both Haunt and Spirit Barrage, Firebomb (with the Ghost Bomb rune) is the only direct damage skill she has. Alongside her combination of Zombie Dogs, a Gargantuan, and a limited use Fetish Army.

The most surprising aspect of this build is the passive skill Fetish Sycophants. Originally taken just to have something in the slot before Fierce Loyalty became available, I actually opted to keep it even after that was available as it’s really fun to use. It has a chance to create an additional fetish pet (which seems to have a fairly high/no summon limit) when you deal damage. They’re only temporary- but they’re really useful while they’re available. I’ve seen the ability to summon as many as twelve at a time already. Fierce Loyalty would only provide a slightly better bonus, which is that I could summon an additional Zombie Dog (for a total of six). But I feel the overwhelming swarm of dagger wielding psychopaths is a better choice.

For they are legion.

I’d considered this build to be more of a novelty than an actually functional progression build at first, but it’s proving to be anything but that. It’s a strong build both offensively and defensively. With pets holding back enemies so I can blanket them with damage over time skills, while the pets hold their own quite nicely and deal decent enough damage even when they’re not scaling with her damage. Then there’s the Enforcer Legendary Gem which makes them even more powerful. So, overall, they’re doing quite nicely.

It’s definitely working out better than I ever could have anticipated.

I’m also considering Zunimassa’s Haunt, which will eventually allow her to have Fetish Army available indefinitely once summoned. One of the few times I’ve felt that a set has actually fit around the skills I’ve chosen to use. Besides the Might of the Earth set which my Barbarian could benefit from. So those are things I can work towards acquiring to take the builds even further.

For as powerful as she seems at the moment I recognise that she’s lacking Intelligence. A substantial amount, too. So the next thing to work on would be to replace her Imperial Topazes with Royal Topazes. A matter of money mostly, which can be easily solved with The Boon of the Hoarder. I’ll also need to keep an eye out for items that boost her cold damage. But it’s a build I can definitely see going quite far. But, for now, the 20th Anniversary Event is complete and I’ll be working towards new goals. Like the acquisition of a range of high level Intelligence equipment for all of the classes I have that could benefit from that. It’d be nice if one of them could farm some of that up.

Commune with the spirits and raise beasts of war.

Witch Doctors likely don’t have any friendship issues. Lonely? Raise a friend! Need someone to talk to? Raise a friend! Need someone to wash the Witch Doctor mobile? Raise a friend! It’s pretty much the solution to every problem they could ever have. Also, when you visit the realms of the dead, which you likely will, you’ll get to see your old friends again. Besides the war with the forces of the Prime Evil being a Witch Doctor is pretty cool. Raise friends, smoke unidentified herbs, commune with spirits, and shoot poison blow darts at people you don’t like. Awesome stuff!

As noted previously, the range of pets and beasts you can summon is something I have always liked about the Witch Doctor.

It’s also something (the drawing of beasts and pets) I have little experience with. Animals? Yes. Bone creatures wrought from the corpses of your fallen enemies? Not so much. So, in many ways, this was an ambitious piece which required a new (yet familiar) approach. It’s one of the few multiple subject compositions I’ve done in quite some time, and, of the ones I have done, this was definitely the most challenging. I’ve also not really developed my ink style as much as I would have liked to (mostly due to constant indecision as to what I want to do with it). However, all of that taken into account, I think it came out quite well.

I’m pleased with it, at least. I also think it might have propelled me in a positive direction when it comes to what I want to do with my ink style and how to use ink in the future. I’m also planning to slap a gallon of digital paint on it later (just simple flat shading) as I enjoy doing that. So, there’s a lot to love from a singular piece.

I’m rather hoping this will also inspire me to do more multiple subject/complex compositions in the future.

I’ve missed those. Though, I don’t believe that singular subject compositions aren’t without merit. I think both are important when it comes to developing your range of skills- especially when you work across multiple media- as it promotes diversity in what you do. That and sometimes singular subject compositions are all you require for a particular idea.

To be able to throw some digital paint on it later is a bonus, too. That’s where I started with digital art eight years ago. I don’t think I’ll ever (or perhaps don’t want to) get the hang of painting from scratch in digital. I’m too set in my ways as a traditional artist. However, where opportunity presents itself, as in the case of this piece, there’s no harm in trying or adding something to a piece people already enjoy. It won’t be a post on here, though. So you’ll need to swing by my site to see the digital colour version if/when it’s completed. I’d rather not spam this blog with posts that derive from previously posted content. Unless it’s a major change/improvement.

In any case, that’s enough rambling from me for now. I’ll leave you to draw your own conclusions about the piece, to enjoy it, or to criticise it if you should so wish. Just nice to be back in that drawing saddle after the last couple of (problematic) years. I hope to have more pieces for you all soon-ish rather than later-ish.

Sometimes it’s a good idea to take a moment to pause and reflect.

We’ve shared a lot of adventures via the Tyrian Travels of late, and, while it wasn’t my initial intention, there has been a chunk of them throughout September to make up for the lull in content from August. While I do like to keep things regular (and my bowels working as they should) it’s not too concerning if we have dips in content. I’d rather not post than post things that probably don’t fit, feel right, or add any value to the collection of sites as a whole. Let’s talk about a lot of things today, though.

First of all- new art! Though a work in progress at the moment it is soon to be finished.

This piece was somewhat delayed as I got the idea earlier in the week but I’ve been under the weather recently (curse that pet cloud). It goes back to my days of playing Diablo III, which, while it’s not my favourite game, it did have some interesting concepts. The Witch Doctor and the range of beastly voodoo summons instead of your standard legions of the undead was one of those.

Don’t get me wrong- I love the Necromancer from Diablo II. It was actually one of the few minion master classes where (with the right combination of skills) you could literally have an army to call your own. It’s a bit like the Necromancer from Guild Wars. Though, the one from the first Guild Wars didn’t have as much capability to summon as many minions of different types (due to skill bar restrictions more than anything). But it’s nice to see something different every now and then. Like the Shaman being a two handed weapon user in Grim Dawn (finally not a holy warrior alternative). So, yeah, this one definitely asked a little more from exploring screenshots and concept art trying to figure out how those summoned creatures looked. 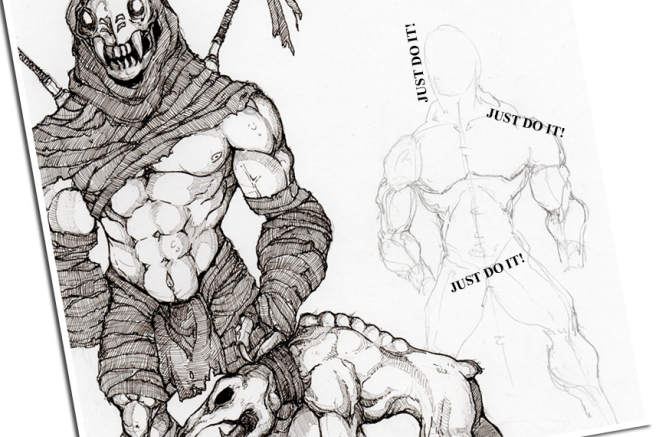 “You said you were going to summon that Gargantuan yesterday!”

The currently incomplete sketched figure is reserved for the Witch Doctor. However, it will likely change in position before the piece is finished as it was only really there as a guide.

Secondly- the Tyrian Travels! It’s been a long road but it’s not over yet.

I’ve had a lot of fun playing Guild Wars 2 of late. I’m not really sure why- maybe it’s because it’s in the Guild Wars series, or maybe it’s just a lot of fun, or maybe it’s the skill system- but something has taken hold of me. It isn’t letting go, either. But, as enthusiastic as I am, I think there will probably be more space between the posts regarding it after Pt. 8 or so. I think by then I’ll have my Necromancer ready to go and we’ll be entering levelling autopilot mode. That said, I’ll try to keep the posts as regular as there are new things to say and I do hope everyone is enjoying the snippets of my (mis)adventures. It’s been a great ride thus far and it’s always fun to look back and see how much I’ve changed in mindset even in a short time.

The new and improved Guardian has been doing well and has already closed in on the previous Guardian’s crafting discipline levels. Just got to get her to Lvl 50 and we’ll be good to go! There’s also the addition of the Necromancer (who’s going to be awesome) and then I’ll be taking a chunk of them to Lvl 50. So, there’s no shortage of things to do there.

As always, I hope, even in some small way, you’re enjoying any (or all) of the content I produce.