Only the finest cat puns for my readers.

Cat Quest is an utterly adorable, surprisingly engaging, and rather satisfying ARPG peppered with countless cat puns. Everything from the Samewrai equipment set to (the excellently named) Purrserk is exquisitely feline-themed, which provides nothing but joy while exploring the vast kingdom of Felingard. Just imagine being a Samewrai. It’d be pawsome. I’d wear the set just for the aesthetics if it was in any way appropriate for my build. It’d normally be ideal for me as it’s purrfectly suited to close quarters combat, but I decided to invest in both physical and magical damage with this build.

Hence why I originally wore the Squire set.

There’s no requirement to wear the entire set, though. So I’d also use pieces of the Chainmail set for their armour rating. Which resulted in some rather interesting statistical bonuses, and allowed me to focus on either physical or magical damage when certain situations (or monsters) presented themselves.

Acquiring new (and upgrading existing) equipment is handled quite differently in Cat Quest. You can buy new equipment, but you can’t dictate which piece (or even which set) you want to buy as the chests have a randomised drop chance. As such the blacksmith chests function as the chests in the dungeons do. That said, I don’t believe that there’s any requirement to own the Golden Key to buy their golden chests. But I feel as though it’s easier to complete the (deceptively difficult) quest to unlock the Golden Key and acquire the contents for free. As there are quite a few regular and golden chests available in the numerous dungeons littered around the world map, and through those you’re likely to upgrade quite a few pieces of equipment without additional investment. 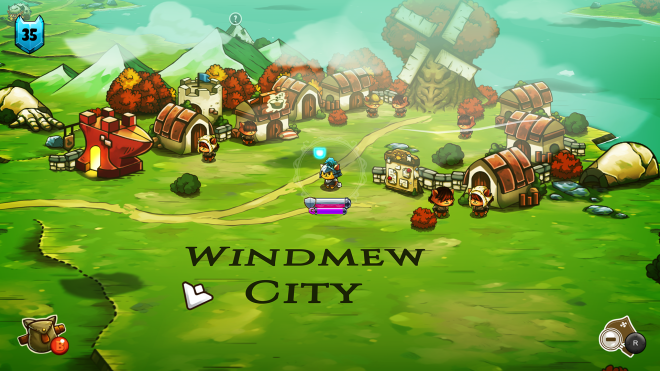 Visiting the different Arcane Temples allows you to unlock (and to upgrade) various skills. You’ve no requirement to revisit the Arcane Temple where you originally learned the skill to upgrade it, but you do need to visit each one to unlock the skill for the first time. Skills can be much easier (but more expensive) to upgrade due to the simplicity of spending gold on them. The randomised nature of chests (and the blacksmith) might mean that you’re trying to upgrade a piece of equipment but it doesn’t drop, whereas skills only require the jingling of a healthy coin pouch to be more efficient.

This can be pawticularly useful in Mew Game.

As some of the challenges presented therein restrict the use of equipment or prevent you from levelling up. Therefore, investing in and utilising certain skills can help to alleviate the difficulty of challenges as you only require more gold. Gold which can easily be earned through various side quests.

I wasn’t really sure what to expect from Cat Quest but I was pleasantly surprised by how fun it is. That’s what makes it great. It’s a light-hearted, engaging, enjoyable, and surprisingly capable ARPG that doesn’t take itself too seriously. Being able to revisit existing content in exciting ways through either Mew Game or New Game+ is great, too. Assigning different challenges to each attempt lowers the likelihood that you’re going to sluggishly stagger through the main campaign again. Not that the main campaign is particularly lengthy. It is, however, filled with cat puns. So many cat puns. Unlike this post which has a scarce few. For these reasons and more I’d highly recommend Cat Quest to those who love ARPGs and/or cats!