I wasn’t expecting to go on this journey.

Not that I mind. In fact, I’m actually quite fond of this piece because it has helped me illustrate (pun intended) some of my more ambitious digital approaches. It’s interesting looking back at how the piece has evolved from the earlier stages where it was more of a painting, to when it became an illustration of sorts, to how it has now become a hybrid of the two approaches. I’ve mentioned before that each of the newer digital paintings has their own unique qualities and this one (unsurprisingly) is no exception.

That’s a sentence that is quickly becoming redundant.

Mostly because I don’t think any piece will ever completely follow the one that came before it. I’m of the opinion at present that the thick painted style that’s starting to show through in this piece will make a return, but perhaps it will be more ambitious or more conceptual in that attempt. I’ll more than likely lean on this approach more as I think it has a lot of character.

I mentioned previously that I wasn’t sure how I’d use the layers for this piece. That’s always been an interesting point for me as I feel as though the layers are part of the digital approach, but I rarely use more than two or three. That said, I’ve also heard many experienced digital artists say that layers (and brushes) are individual to the person. There are no requirements to have multiple layers and you can use just the one if you prefer. I think that has always made more sense to me given my experience with traditional approaches. But, at the same time, it’s quite nice to be able to section up some areas of a piece to make it easier to add or edit them. Regarding this piece, it’s mostly painted on a single layer with a few extra layers for convenience. 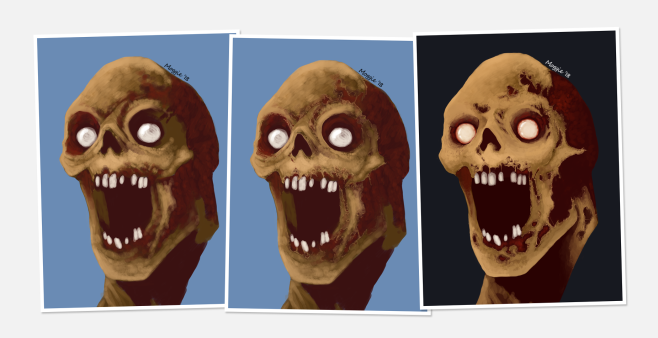 I’ve rather enjoyed writing these posts, too. It’s nice to have creative content that looks at how everything has changed. I’d felt that creative content had become stagnant, but through these work in progress (and the material studies) posts the newer content is more interesting as a result. It also gives me the opportunity to talk about things in a broader and less specific way. I can then easily tie this all together with an image or three, which makes it enticing even if you don’t care about what I’m actually saying in the post. Which I hope you do.

But even if you don’t it’s not like you can’t enjoy the pretty pictures all the same.

I’m particularly fond of the evolving colour choice in this piece. I’ve tried to include more darker colours to enhance the lighter ones, and to suggest a better sense of depth and contrast in the piece as a whole. I’m not sure if it actually worked but such is the way of painting anything. You can never be entirely sure of how a piece is going to develop until it has done so.

There’s also a whole section of this piece that I’ve yet to paint. It’s not a particularly large section, but the harness and mechanical components have yet to be added and will be used to frame the piece quite nicely. I don’t intend to paint much of the jet pack, either. But we’ll see how that goes when I get around to it. It shouldn’t be too much longer before we see the final version of this piece, though. The rather drastic change that occurred between this and the last work in progress shouldn’t occur again. But even if it does this will be the last post regarding this piece until the final version is presented, as I feel as though there is little left to say now. It’s definitely inspired more content than I could’ve anticipated.

Doom, the UAC, Doomguy, Pinkies, Revenants, and all associated trademarks and devices are owned by id Software.