I figure now might be a good time to lay this piece to rest. Then again, given his noticeable resilience to death- I don’t think it’ll be staying there long!

I know it seems like an odd decision to make six months after the piece was started but I feel that it’s probably better to bury (pun intended) some of the pieces that were being worked on before. While trying to sort everything out earlier this year I was thinking about some of the concepts and how, repeatedly, and annoyingly, they would just keep coming back up. Mostly ’cause I wasn’t happy with just dropping them but they weren’t complete… so I went around in circles. Hilarious for anyone watching, I’m sure.

Of course, this piece still isn’t “complete” but due to the amount of time between the original work being done on it and now and how everything has changed since- that’s probably a good thing. I did clean it up a bit and generally bring it up to standard but it’s still going in the Sketchbook section as a “nearly complete but not quite” piece. As, really, it doesn’t matter where they end up on the site- just as long as they’re there. Right?

This allows me to draw a line under all of that work from back then and start with the most recent concepts. There are still a few things hanging around from earlier this year but they were never actually started or developed so they’re just miscellaneous concepts (thank fluffy kittens) and so I can just start them whenever. 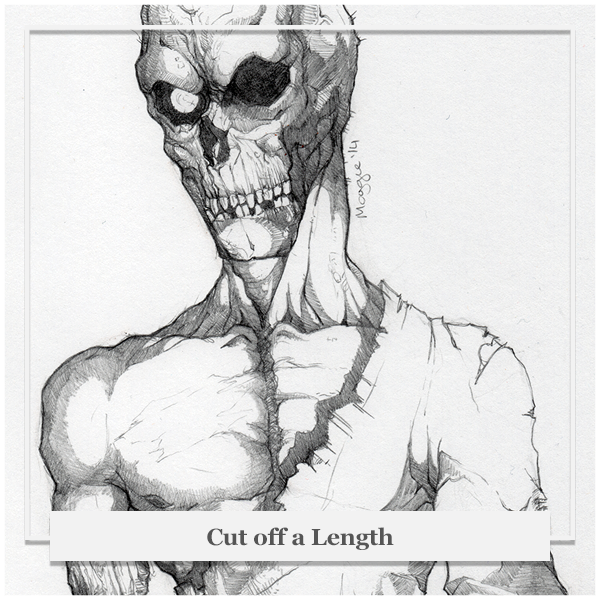 They’re not actually sticking out like a sore thumb and making me wonder what I should do with them, whether I should bin them or send them to that folder which once something enters it is never seen again.

But that would just be tragic for all concerned.

Cut off a Length is something that I liked all those months ago and I still like now. I would say it probably laid the foundations for the work you’ve seen since as it was one of the first pieces I’d started using such heavy shading from the off and decided that would be the style from the very first sketches. This is actually a throwback to way I used to do things but didn’t really enjoy how dark they were as I didn’t have a great understanding of the technique back then. But now I do. So, woo! More lines and graphite and tone than you can shake a reasonably sized stick at.

I have to say I am surprised by this piece in some respects. I didn’t think that anything from earlier in the year where everything was such a mess would actually be as good as this, so, hey, maybe I wasn’t such a mess? Or maybe I’m just awesome? Or (most likely) I have some of the best luck at the worst times.

I don’t really know where I’m going next at the moment. I’ve been thinking about some The Elder Scrolls V: Skryim work or maybe something with watercolour. I have a fascination with ink at the moment thanks to the heavier shadows in my pencil work and I did just play a trilogy of Batman games… it really could be anything I suppose. Been a while since I’ve been in this position and it’s as comfy as a dozen pillows while someone makes you coffee and you listen to music from before you were born. By the way, if that sounds good to any of you ladies I am sort of on the dating scene.